LazySysAdmin is another VulnHub CTF.

The description suggests you shouldn’t overthink this. The author states that it was built out of frustration from failing the OSCP exam and that you should be looking right “in front of you” for the answers.

The description intrigued me, as my main goal this month has been to increase the speed that I solve these VMs and reduce the time wasted in rabbit holes.

I’ve never seen an IRC server on one of these before, so I decided to go check that out first while I ran other scans in the background like Nikto and Go Buster.

I connected to IRC with Hex Chat and tried some things, but got nowhere with it. I reminded myself not to waste time.

Samba also looks interesting. I’ll come back to that later. But, first… 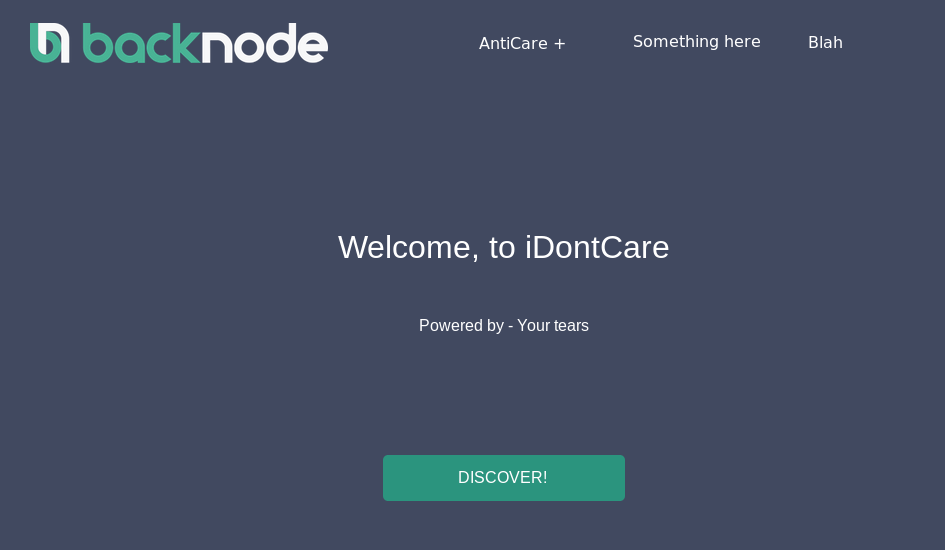 Port 80 presents us with a basic static page. Nothing too interesting here, except some encouragement to try harder if you scroll down the page.

Checking the paths listed in robots.txt didn’t turn up anything too interesting.

Next, I ran a Nikto scan as well as a directory brute force via Go Buster.

Nikto and Go Buster gave me the same results, which were:

WordPress is known for being insecure when managed by “Lazy” Admins. 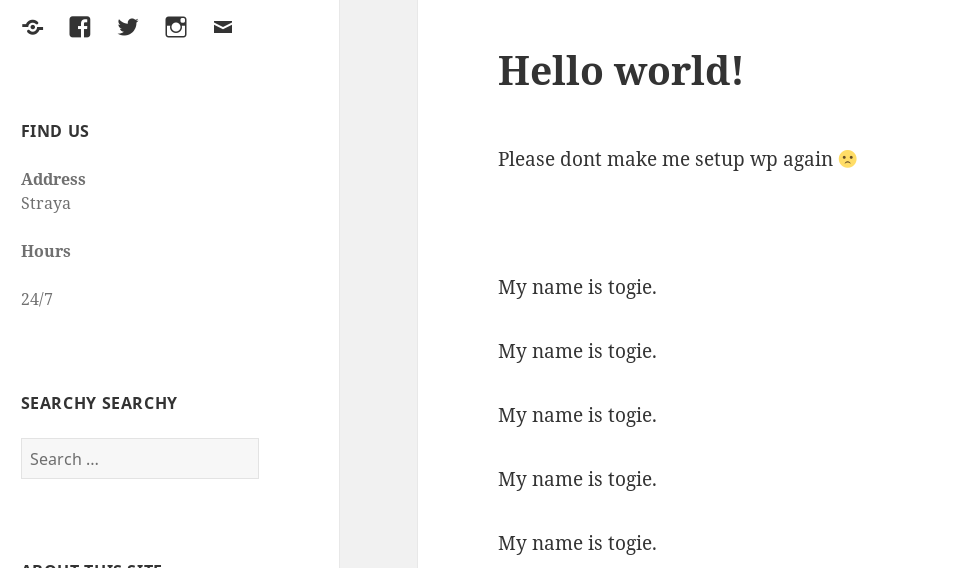 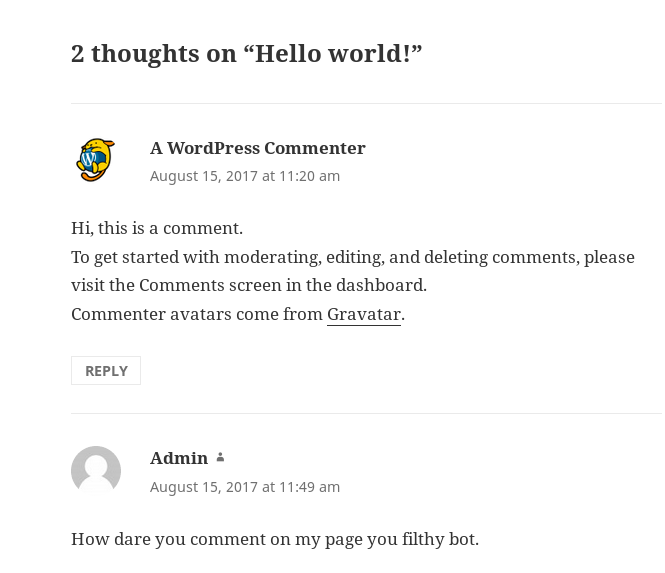 Here, it looks like our Lazy Sys Admin is using the default WordPress Admin account. I verified this by running wpscan and enumerating users.

I tried brute forcing the WordPress login with the Admin account (again, using wpscan) but this went nowhere.

At this point, I hit a dead-end, so decided to revisit the enumeration in step 1. I hadn’t yet checked on the Samba stuff.

I connected to Samba through the Kali Linux file explorer, but could have done this through the command line as well using smbclient. 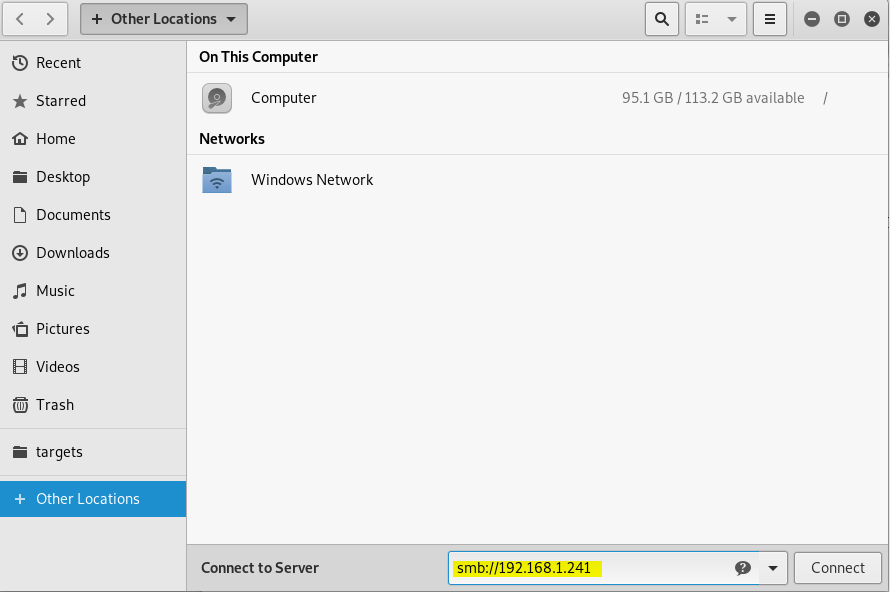 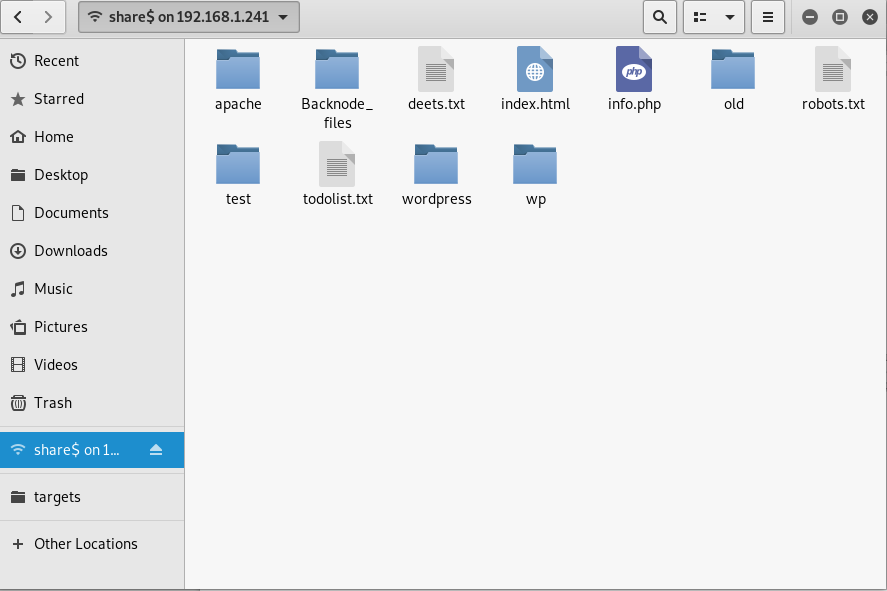 This is clearly the Apache web root directory

Some things of interest here:

Todolist had a fairly useless message, but deets.txt had the following content, supporting the “Lazy Admin” theme.

The next thing to check is wordpress/wp-config.php, which contains MySQL database credentials. 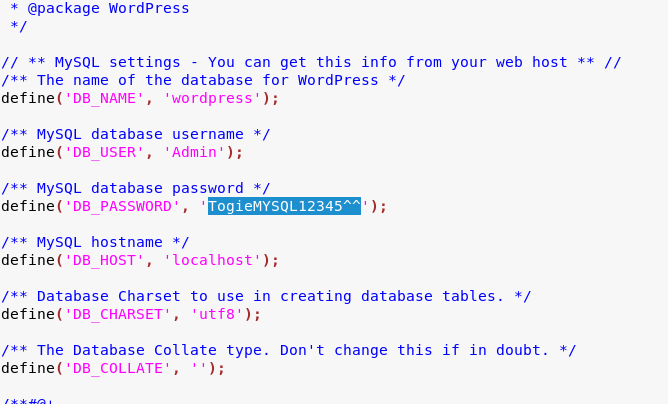 The MySQL password worked for logging into WordPress! From there, I spent some time messing with WordPress and got a reverse shell connection back very easily, but this mostly turned out to be a waste of time in the end. More on that coming up.

Using my reverse shell, I checked /etc/passwd and saw the user togie there, as expected, but nothing else useful.

I tried the MySQL password on SSH with the togie user, but no dice. I also poked around in phpMyAdmin using the URL found earlier by Nikto, and it sort of worked but had some errors and seemed to be a rabbit hole. Before going any further, I decided to revise my approach.

I thought back to the deets.txt file from earlier, which said the password is “12345”, which sort of matched what I found for the MySQL password. I thought I could apply the same theme to the SSH password. Eg: TogieSSH12345^^

Seemed plausible, and appropriately “lazy”, but this did not work.

While I thought about what to do next, I figured I should at least be running a wordlist attack against the SSH login in the background.

I used hydra combined with rockyou.txt

The SSH password is literally 12345, which is the 2nd freaking line of rockyou.txt, a file that contains over 14 million passwords.

They already told me the password was 12345 back in deets.txt.

I was wasting time and over complicating things. Lesson learned, togie! 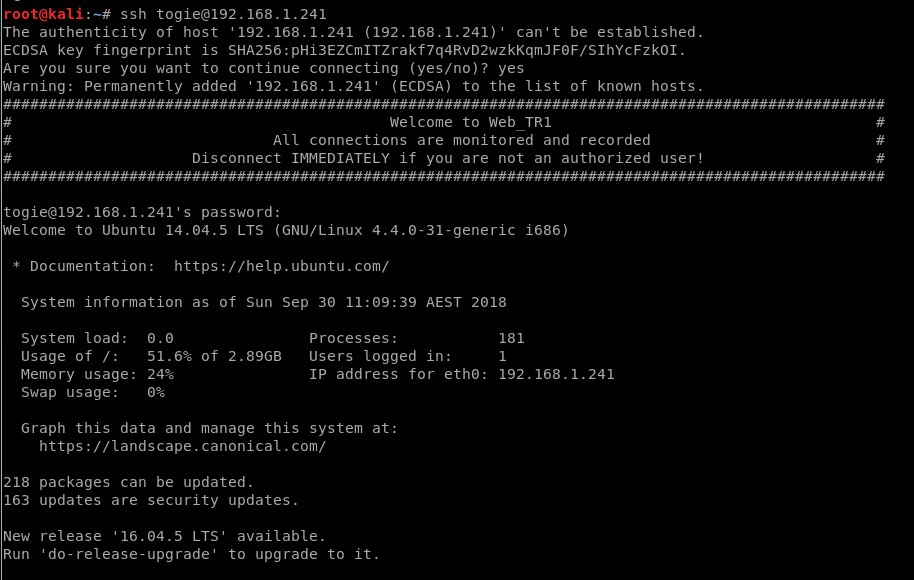 Normally, at this point I would run scripts to enumerate for privesc opportunities, and then start manually digging around the filesystem. But, the first thing I always try is sudo.

From here it’s a simple matter of running sudo su - to become root.

And capturing the flag… 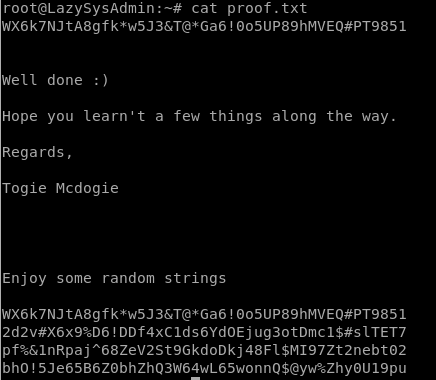 Things I wasted time on

That’s not to say these were all useless, or maybe not even dead-ends (I didn’t dig any deeper.) It’s just that there were much simpler methods available, right in front of me, as the VulnHub description said.

Thanks for this, Togie McDogie. I will keep it all in mind when I start the PWK labs in November.

Overall, though, this one was quite easy. It took way longer to write this blog post than it did to solve the VM. I’m feeling more ready for my OSCP journey with every passing day.