How to Get Root in Kioptrix 2

Kioptrix 2 is a Vulnhub VM. This is the first in a series of write-ups of various hands-on hacking resources I will be working through on my way to the OSCP.

First: get the IP addresses

We will need this later for reverse shells and other fun.

Look for something in the netdiscover output with a MAC Vendor / Hostname of “VMWare.”

Found the following ports and services: 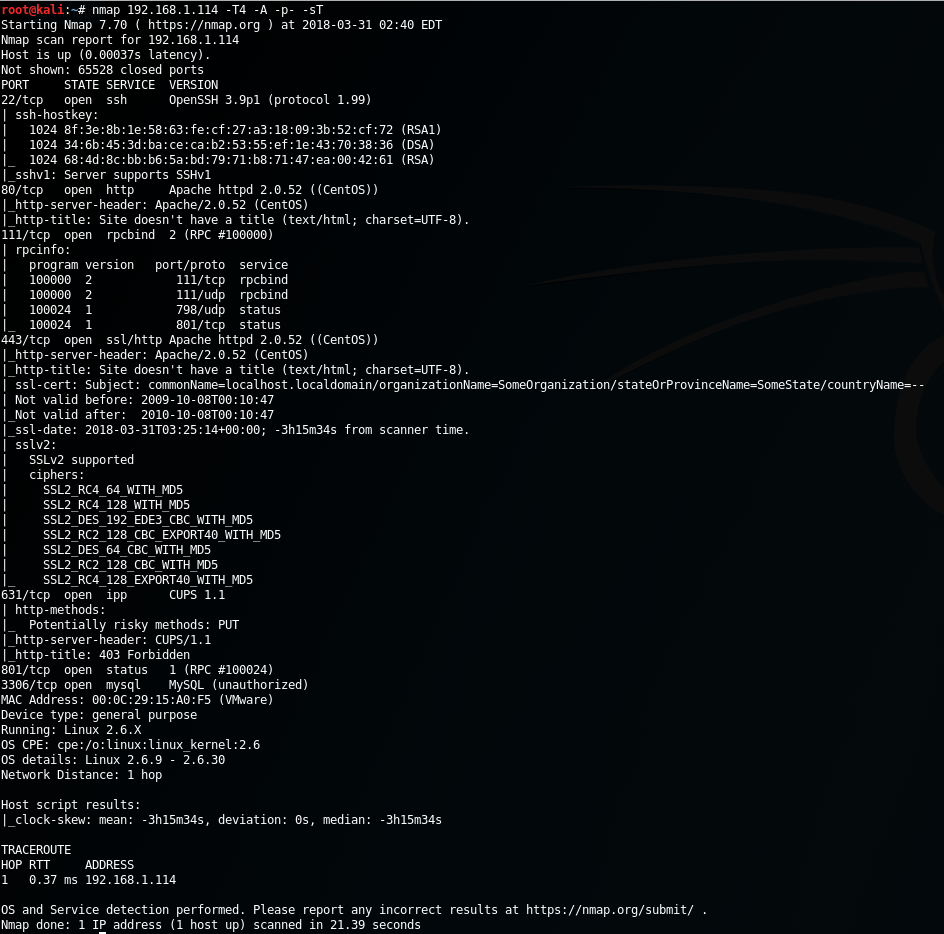 Anything interesting from NMAP?

I immediately noticed the printer service open on port 631, with a “potentially risky method” of PUT allowed. Let’s keep it in mind for later. There’s also some RPC stuff.

But port 80 is open and so is 3306. That means we probably have a database driven website running. There may be opportunities for SQL injection on that website. Let’s go check it out.

And in a web browser:

Like most amateur PHP projects, this one will probably be full of holes!

We could try some common passwords (like admin/password), try to brute force it, or try some SQL injection.

Start up a Nikto scan in the background

Before we start fiddling with this login system, let’s run Nikto in the background to see what it digs up. Nikto can take a while to run in real pen tests over the internet, so for best usage of our time let’s get that scan started right away.

You could also start up dirb to scan for hidden files on the web server after Nikto is done. Or even while Nikto is still running, depending on how responsive the target is and how many requests per second are allowed.

Alright, now back to the web app.

As we have a PHP/MySQL backend for this deliberately insecure app, I’m going to take a wild guess that the authentication query for this app looks something like:

In SQL Injection 101 the first example given is usually ' OR 1=1 -- for a login form, which effectively turns the parsed query string into this:

Note: there is a space after the double dash. It won’t work without that!

As 1=1 is always true, the database would return all records in the table no matter what. Assuming the back-end logic then only processes the first returned row, we will become logged in as the first defined user in the table.

Well… that was easy

SQL injection worked. We have bypassed the login and are now viewing the “Basic Administrative Web Console”

An old Apache and PHP version (highlighted) but not much else that might help us get root.

Back to that web app.

It says we can ping something. Let’s ping google.com. We get the following output:

That looks like output from the real ping command.

This application may be vulnerable to shell command injection. Let’s test it out by adding an extra command after the ping by adding a semi-colon:

We have a directory listing showing index.php and pingit.php.  We could keep sending commands this way, but let’s get a reverse shell connection now to make things more convenient.

On our attacker machine (Kali Linux), start a netcat listener:

The flags above are:

Now let’s connect back to it from the Kioptrix website:

Enter this for the “ping” field:

Nice! We’re in! We have a low-privileged shell as the Apache user. We still need to find some way to escalate our privileges to root, though.

My first instinct is to check the PHP source to see if the MySQL credentials are available in plain-text. Credentials are often re-used for various other things.

Here we find some MySQL credentials right away:

Trying this on SSH

Let’s see what users are available on the system:

This reveals a couple bash users at the end, john and harold. Before we go further we can try the “hiroshima” password on both accounts by SSH, and could also start a hybrid/dictionary attack against the SSH login in the background, if we were stuck.

hiroshima did not work for either user on SSH, and I don’t feel like attacking the SSH login with a wordlist just yet. Moving on…

The MySQL server is set to only allow logins from localhost, and the /var/www/html directory is not writable by our limited shell user (apache). To work with the MySQL database we can create PHP files or other scripts in /tmp (writable by apache) that enumerate the contents of the database (using our pilfered credentials above), or just directly use the CLI client. Using the CLI client is the simpler option.

But! The MySQL CLI client does not work properly over our improvised reverse shell. (It’s buggy and weird, try it yourself to see what I mean.) To make it work properly, we can “upgrade” our reverse shell by running a python command:

Now we can connect: 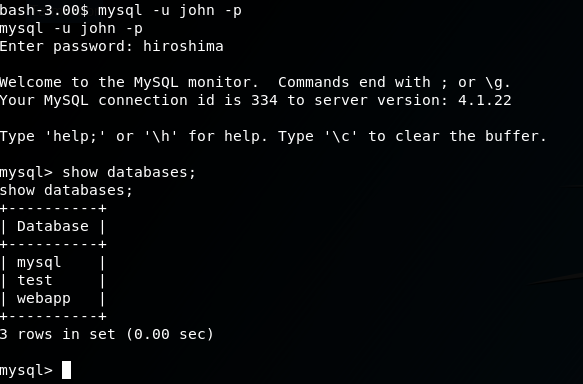 Digging around in the MySQL DB for webapp, I found plain-text passwords for the web application that would allow us to login without using SQL injection. But I didn’t end up finding any other use for these passwords. That’s not to say there isn’t any, though. 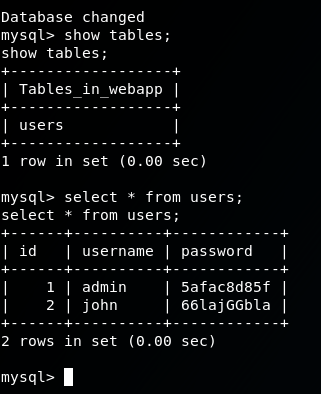 Selecting data from the webapp.users table and finding more passwords

Let’s try for some easy wins

We should definitely check to see if there are any known privilege escalation exploits in anything running on this box.

There was that printer service running above, which I tried compiling an exploit or two for first but didn’t find anything that worked.

From the NMAP scan at the beginning, we noted this server is running CentOS. Let’s check the version:

This gives us CentOS release 4.5 (Final). Hmmm… 4.5, that’s gotta be EOL by now. A quick google for ‘centos 4.5 exploit’ brings us to a promising result on the Exploit Database: https://www.exploit-db.com/exploits/9542/

Let’s try it out!

This gives a warning but should still compile successfully.

Note that the prompt changes slightly after this point from bash-3.00$ to sh-3.00#. That # at the end of the prompt suggests that we are now root! Let’s verify:

What to do now?

First thing I did was to change the password on the root account so that I could connect directly by SSH with a proper shell, which gives me more freedom to navigate the system comfortably.

Looking for a flag

Kioptrix 1 had a flag that could be read by checking the root user’s mail, but I didn’t manage to find a flag in Kioptrix 2 despite spending an hour poking around. It states there is a “text flag” in the Vulnhub page for it. I don’t know if there actually is one or if that was a mistake.

The MySQL root password is the same as the john user: hiroshima. Using the MySQL root, we could have created a new DB user that is allowed to connect from our attacker machine and then used better MySQL client applications to peruse the DB content. (assuming we hadn’t already rooted the box and got write access to /var/www/html to upload something like adminer.php)

I mean, not as fun as the Rick and Morty VM, but it was way more satisfying to complete the challenge without any hints at all. Definitely going to be doing more of these.