Port 8000 contains a WordPress install. An unusual WordPress username can be found pretty quickly, but it did not fall to a brute-force by wordlist login attack via WPScan. I cancelled the attempt after about 10 minutes figuring that was not the intended way in.

Note that the uploads directory does NOT have directory indexing enabled. If we succeed in uploading anything there, we will need to guess the path to the uploaded file.

After successfully uploading a GIF or PNG, there is an HTML comment hidden at the end of the output that points us to the full source code for this script on GitHub: https://github.com/fatihhcelik/Vulnerable-Machine—Hint

From this source code, we can determine the following:

We have two minor challenges to overcome here, one slightly trickier than the other.

1] Challenge 1: Upload a PHP shell on the webserver

getimagesize() will return a “mime” value of "image/gif" for ANY file that starts with GIF89a as the first bytes. Too easy. My PHP payload file is a simple text file, as follows:

When executed, this PHP script will cause the webserver to initiate a reverse shell connection back to my attacking machine.

On my Kali (attacker) box I start a netcat listener with:

This will require some basic scripting to generate the possible MD5 hashes (up to 100 of them) and then attempt to access each generated path one at a time. This is obviously too tedious to do manually.

As an added challenge, the webserver has a cronjob removing *.php files from the uploads directory every 5 minutes. You really need to automate this to find your upload before it gets removed.

I wrote my script in PHP, but you could write this in almost anything. Python would be a good choice as well. Here’s mine:

Executing our finder.php script from the command line will try the generated URLs one by one, until it locates our uploaded file. This should only take about 5 seconds or so.

Once it finds the valid path, our uploaded payload script gets executed on the server and immediately creates a reverse shell connection back to us!

Getting a shell from HackInOS

First thing to do is upgrade the flakey reverse shell to a slightly better one that allows for interactive commands such as su:

As per usual when faced with an unknown Linux system in a CTF, I download a copy of the linuxprivchecker.py script to the target machine. I usually do this by retrieving it via curl or wget from a web server on my attacking machine.

Linux Priv Checker reveals a misconfiguration: the SUID bit has been set on tail, which will allow us to view any file on the system. We can use this to view the shadow passwords file and then attempt to crack it.

And then we also grab /etc/passwd to combine shadow with passwd later:

We use unshadow on our Kali machine to combine the contents of shadow and passwd into a single crackable file.

And then crack it with John the Ripper:

I tried to SSH in with this password, but it didn’t work. I noticed earlier on that this web server was in a docker container and it looks like the SSH service isn’t part of the container. Either way, we can use su to become root of the container now: 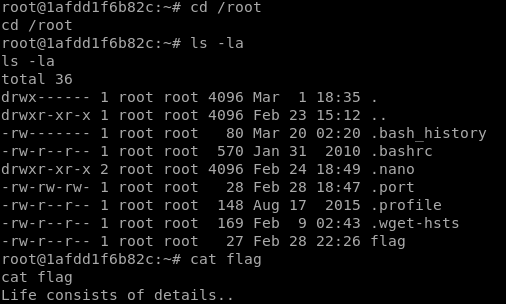 At this point, we’ve done about as much as I would have expected from a normal beginner-level challenge.

But the fact that we’re in a docker container, and that ambiguous flag, suggests maybe we should dig deeper. Let’s keep going..

With shell access, we can view the contents of wp-config.php to view the MySQL credentials.

What is this host named “db”?

So WP is connecting to a MySQL instance on a host that the docker container refers to as db. We can try connecting to it from the command line directly (make sure you’ve run the “upgrade” command from earlier in this walkthrough so that you have an interactive shell.) 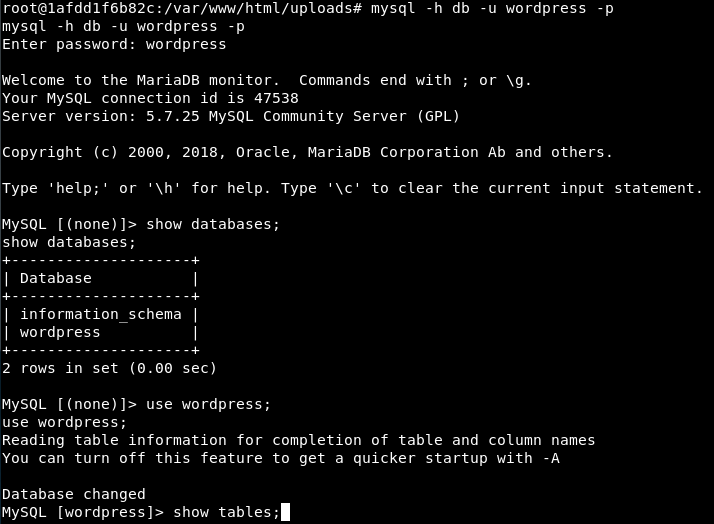 Within the wordpress database we find an unusual table called host_ssh_cred 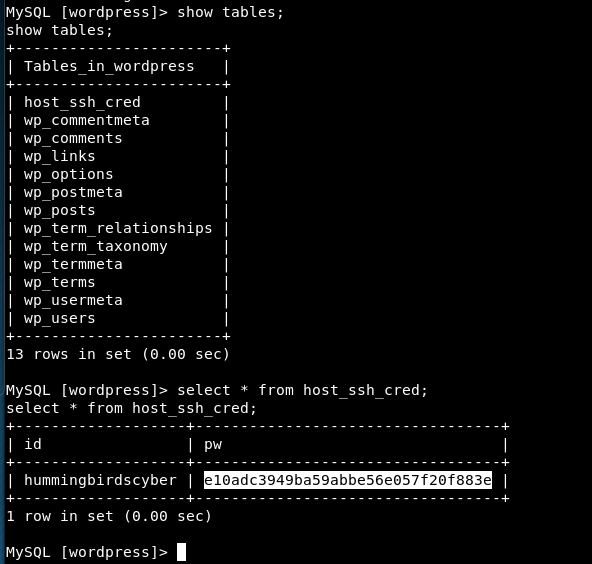 This contains an MD5 hash that is easily cracked to reveal: 123456

Connecting to the real SSH host 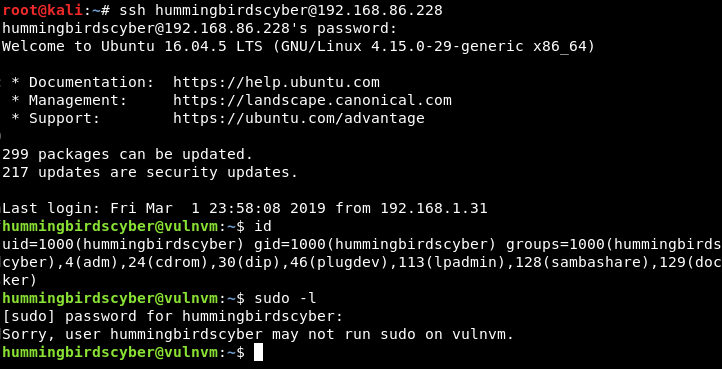 Browing the user’s home directory revealed an SUID root executable on their desktop:

I don’t think they could be any more obvious than this. Unless they’re trolling us, as is common in CTFs.

Running file on it reveals that it is a setuid ELF 64-bit LSB executable, x86-64.

Let’s do a quick check for any recognizable strings in this file: 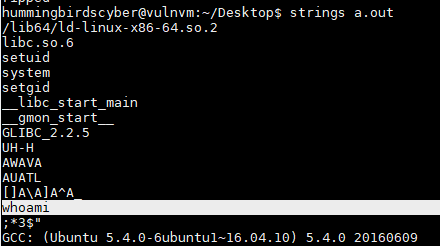 From the output, we find whoami. If we execute ./a.out as is, it outputs root and then terminates. So all it appears to do is setuid to root, run whoami, and then exit.

Checking the $PATH reveals that /home/hummingbirdscyber/bin appears in the path before /usr/bin/.

We can take advantage of this by creating our own script called whoami containing whatever we want to execute as root, and it will be run as root instead of /usr/bin/whoami due to the path.

/home/hummingbirdscyber/bin doesn’t exist yet, so we mkdir it first.

Then add the following payload to a new file called whoami 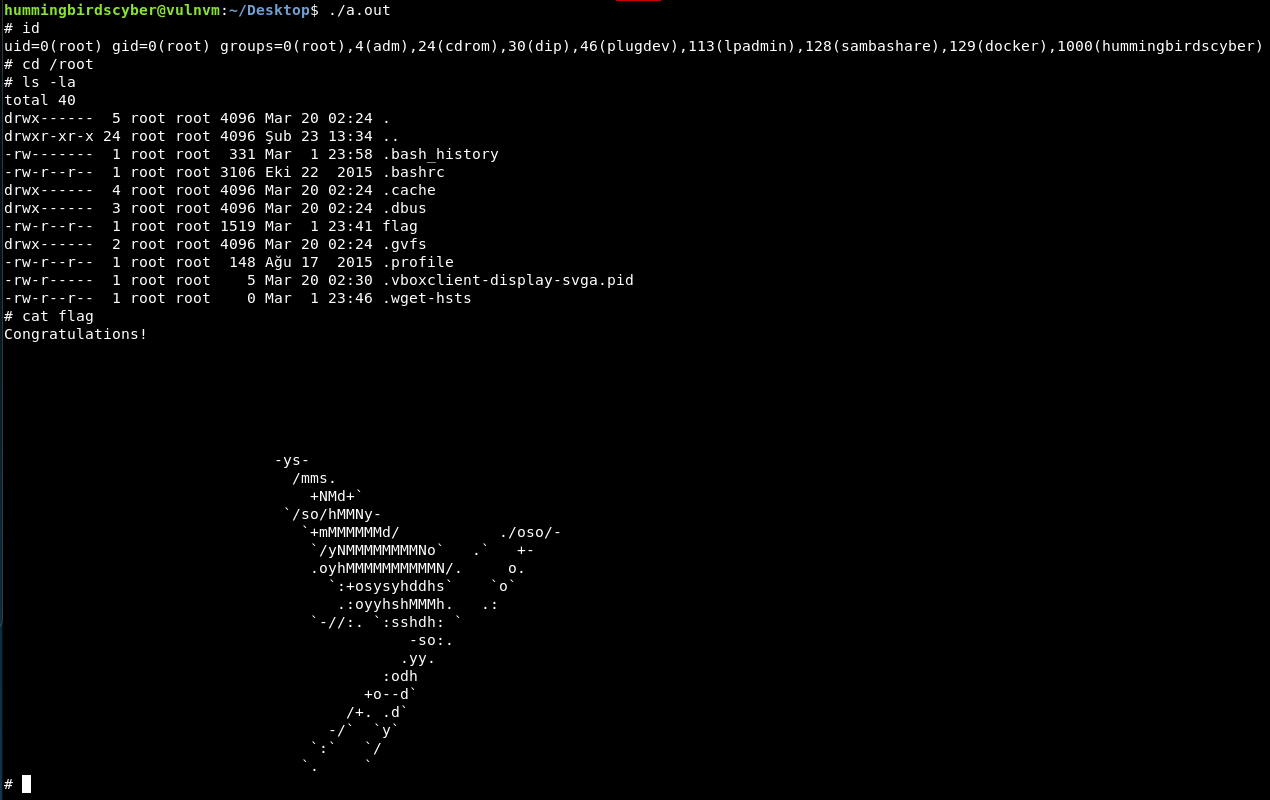 Thank you to Fatih Çelik for this fun VM, and I hope someone out there found this write-up useful. More walkthroughs to come.